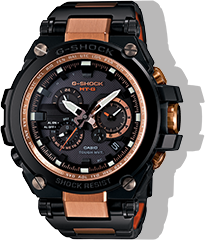 Born at a time when watches were generally considered fragile instruments, G-SHOCK began as the dream of a young engineer, who wanted to create “a watch that doesn’t break, even when dropped.”

Achieving their target turned out to be unimaginably difficult. Exhausted both physically and mentally after months of hard work, they began to fear that the project was approaching a dead-end.

It was just at this time that Ibe observed some children playing in a park. “No impact reaches the interior of a bouncing rubber ball,” he thought. This observation led the team to develop a watch with a hollow structure with the module suspended inside.

After more than 200 experimental prototypes had been produced, a shock-resistant structure was achieved. The first G-SHOCK, the DW5000, was launched in 1983 some two years after the start of development. G-SHOCK has followed a path of unique evolution ever since, while continuing to retain this basic inherited structure.

To remain unchanged. To remain invincible.

Today as G-SHOCK prepares to celebrate its 30th anniversary, the tough, fiery spirit ignited by Ibe’s passion burns on, blazing even higher.